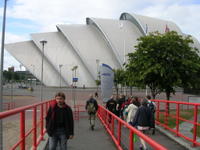 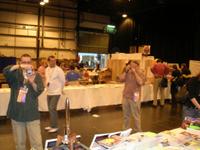 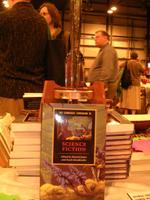 Memories of the Worldcon in Glasgow seem to be fading (maybe it was the Finnish party, subsidised by Finlandia vodka), but the convention turned out to be one of the best events in years. There was a strong showing at the Science Fiction Foundation table, where two books were launched: Christopher Priest: the Interaction edited by Andrew M. Butler and Parietal Games: Critical Writings by and on M. John Harrison edited by Mark Bould and Michelle Reid ("Foundation Studies in Science Fiction", 5 & 6). This proved even stronger when Edward James and Farah Mendlesohn won a Hugo for "best related book" for the Cambridge Companion to Science Fiction (Cambridge University Press) -- see photos above). 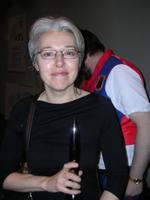 Other British Hugo winners were Susanna Clarke (Best Novel : Jonathan Strange and Mr Norrell),Charlie Stross (Best Novella), Sue Mason (Best Fan Artist),David Langford (Best semi-pro magazine: Ansible, David Langford (again) (Best Fan-Writer, and the Plokta Cabal (Best Fanzine). The Special Interaction Committee Award (not a Hugo Award)went to David Pringle, former editor and publisher of Interzone.The "Big Heart Award" (a kind of "services to fandom" award, was jointly awarded to Walter Ernsting, John-Henri Holmberg and Ina Shorrock: I'm particularly pleased about the last as Ina is a friend and one of the founders of the Liverpool group of the 1950s. 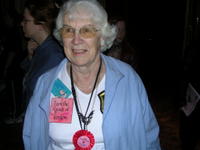 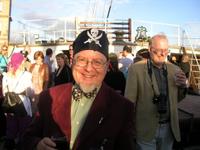 Would you award a Hugo to this man? Edward James at the Voyager party. (right) 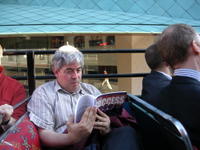 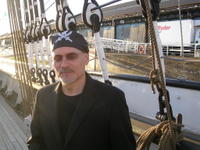 Jon Courtenay Grimwood: the only man who managed to look cool at the Voyager "Pirate Party" (right). 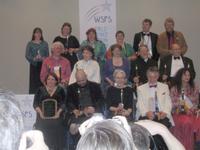 From Alien (environments) to The (Glasgow) Matrix

A journey across the Atlantic to the Science Fiction Research Association conference in Las Vegas last month and the forthcoming (I leave tomorrow) World SF Convention in Glasgow has meant comparatively little time for blogging, but I've managed to get some more links up on the to Hub. I was chagrined when the server fell apart last week (it now appears to be better -- thanks, Rob!) but I was secretly pleased when several people actually noticed that the Hub was down.

Las Vegas was like everyone told me it would be -- "there's no there there"; "24-hour gambling hell"-- but it still surprised me my first experience of Las Vegas was the rain. This is meant to be the Nevada desert, yet I step out of the airport to feel raindrops falling on my head and lightning flashes in the hills. I ended up standing beneath an Eiffel Tower in the rain, wondering which city I was in. It felt like the time I caught a cold in the Peruvian rainforest . . .

But evidence that I have been thinking of sf: Roz Kaveney's interesting new book on sf film is reviewed below.

In From Alien to the Matrix, Roz Kaveney does two things, and does both of them uncannily well. The first is a theoretical defence of what she calls the “geek aesthetic” in considering sf films (and by extension, any popular art form). By this, she means both the “active consumption” of an art form – the simple but oft-overlooked fact that “sitting through films and television shows can be the start of appreciating them, not simply an end in itself – and the “hobbyist” nature of the means of production of many of these artefacts, which begins with many of their creators starting off as fans and the creative fan-cultures which centre around phenomena like fan-fiction. Films, and particularly sf films, says Kaveney, are “thick texts”: products not just of the creative process which makes them but “all stages of that process . . . like scars or vestigial organs”. Unlike many people who write about sf film (but by no means all: this is not a knee-jerk reaction against critics of the field) Kaveney is versed in wider aspects of science fiction and sf fandom and understands/is part of/forms its collegiate nature. When she remarks that sf film is not only often about Big Dumb Objects but is itself a kind of Big Dumb Object she is the person who invented the term. And when she goes on to dissect particular cinematic texts, which is the second and longest part of the book, it is as critic and fan noting how these texts work and why, and how and why, in some particular cases, they don’t work.

And she does this with wonderful skill and wit. This is a book which needs to be read as an object lesson in how to consider a science fiction film.

Kaveney considers, for example, why Paul Verhoeven’s Starship Troopers doesn’t work as what Vehoeven seems to think it is (a satire) because it is based upon a fundamental misunderstanding of Heinlein’s novel; and why the Trek-located satire of Galaxy Quest works (because it is based upon an understanding of the strengths of fictions like Star Trek as well as their parodiable aspects). A chapter on invasion films moves from The War of the Worlds and The Thing to Mars Attacks and Signs and covers a large amount of territory in a comparatively small space to examine the way this once-powerful theme seems to have worn out. Another chapter on comedy looks at the way the idea of the “robot” is used in Dante’s Small Soldiers, while the following two chapters consider the idea of “cognitive dissonance” in films that question ideas of identity, especially Dark City and the less-depth-but-more-style The Matrix and its sequels: it would have been interesting, although a digression, to have seen Kaveney on the several books which have claimed The Matrix as a work of philosophical or religious interest. The rest of the book pulls some of the ideas discussed so far together and develops them along with the idea of “creation as product” to consider the “franchise” films, which share, in one respect, sf’s “collegiality” but in another respect are almost at the other pole.

Sf’s ideas, says Kaveney, have “hinterland”. They are passed along in an ongoing dialogue between writers and readers (and writers and writers: and readers and readers). The hinterland of sf film tends to be film rather than sf – “Most filmed SF fails to work as SF simply because it lacks contact with a broader context of influence” – and even here much sf film, suggests Kaveney, avoids dialogue with other cinematic genres (the noir and Hitchcockian suspense film may be an exception). She wonders whether the “franchise” film such as the Star Wars series, which sets up its own background, could be an exception, but despite the vast amount of fannish exegesis and enthusiasm finds that this is not the case. Here, I think, is the most interesting part of the book. Kaveney takes us through the sequence and shows how George Lucas fails to engage with his source material in any radical or even interesting way. (Kaveney is silent about Joseph Campbell and the “monomyth” for, I think, good reason: if a mythic “universal” is present in a text that says nothing at all about how interestingly or effectively that universal is presented: something many writers on Star Wars have overlooked in their enthusiasm.) In more depth, and with more attention to detail Kaveney considers the “Alien” quartet as one of the comparatively rare cinematic sf sequences that do possess a “hinterland”, where changes in the sequence become a dialogue with previous versions rather than attempts to tie up loose ends. Direction, acting, sets, script and cinematic technique all play their parts, as do the theoretical stances on questions like gender and sexuality which we bring to bear as we “read” the character of Ripley as she changes throughout the series.

Kaveney herself approaches the films she analyses as (if you like) a fan. That is, she is watching these films because she likes them, or hopes to like them, or finds them interesting. She is knowledgeable and enthusiastic, and communicates this knowledge and enthusiasm. You come out of the book knowing a lot more than when you started it, but never feeling that reading it is a substitute for seeing the films: instead, what you want to do is rush to the video and watch the films again in the light of what she shares. But as she writes with the best of fannish verve so she writes with the best of academic engagement. This is a jargon-free zone and, apart from a few glitches which read like sentences in need of repair, wonderfully reader-friendly. In short, this is a book which will be enormously helpful to people studying sf film, but will also be a sound and friendly companion to those for whom a science fiction film is a Saturday night in with a six-pack and a few friends.

Posted by Andy Sawyer at 1:54 pm No comments: